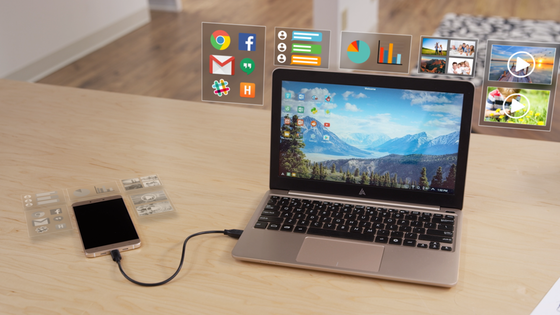 Lost Your Survey?
FAQ: The Superbook: Transform Your Smartphone into a Laptop

Charging Adapters To clarify for those confused about the charging adapters (because they’re labeled a little differently in the survey). We’re offering these chargers: - Type A (US) - Type C (Europe) - Type F (Asia) - Type G (UK) Is your plug not on the list? Don’t panic - you can still charge your Superbook easily. Because the Superbook charger is a USB cord, with one end (Micro-B, connects to the Superbook itself) and then another end (USB-A, connects to any USB charging adapter), the charger will work with any USB charging adapter you have lying around (it looks like this:https://a248.e.akamai.net/f/248/9241/30d/images1.newegg.com/NeweggImage/productimage/A19P_130317635118100506vk2It4ECLS.jpg). You most likely are already in possession of something like this that is compatible with the Plug type in your country!

What’s the difference in Micro-B cords? While it is true that all Micro-B cords work with every Micro-B port, every major phone manufacturer (Samsung, LG, HTC, etc.) has its own slight idiosyncrasies. We’re trying to ensure that your phone is charged at the fastest rate when connected to the Superbook by accounting for these differences. That said, cords should work across brands, just not as efficiently.

We’ve got a lot of awesome feedback from our community here, but while we’d like to add a ton of the most-requested features to the Superbook, we’re trying to keep our Kickstarter model as affordable as possible. Contrary to what it seems, adding features actually requires a lot more of us than just asking our backers to slap on an extra fee on top of their pledge (like we can the 1080p screen). This is because some features just aren’t economically feasible for us in terms of manufacturing costs. While we’re completely blown away with the response of Kickstarter (thank you all!) a manufacturing order of 5k-10k units doesn’t automatically translate into a discount in production costs, unlike the 100k+ orders placed by much larger companies. Here’s a list of features that have been requested of us that we WON’T be considering for our Kickstarter model (but maybe in the future): - Audio speakers (trust us, the ones on your phone are much better than any speaker we could source affordably) - Touch screen - “Full size” keyboard, w/ full numberpad - Keyboards in different languages (we’ll have the decals, though!) What we ARE considering: -Backlit keys Thank you all for your understanding! We love hearing your feedback, so keep on sending it in :) Last updated: Wed, Jul 27 2016 9:17 pm EDT

What are the minimum smartphone requirements needed to use the Superbook?

Your smartphone must be running Android 5.0 or above with at least 1.5GB of RAM and USB-OTG support. If you are not sure about your phone’s specifications, please check out http://www.gsmarena.com. Last updated: Thu, Jul 21 2016 12:30 pm EDT

Can you still use your smartphone’s camera and other features while it is connected to the Superbook?

Yes! You can use the camera to take photos and take video calls! Check out The Superbook Special, which is our premium package–it includes a mount for your smartphone, so that you can position it in a convenient location (to aim your phone’s camera at yourself for video chats, for example). Last updated: Wed, Jul 27 2016 5:04 pm EDT

Why don’t you guys support iOS?

We’d love to do this for iOS and we’ve even had conversations with the folks at Apple, but Apple is really strict about keeping their software ecosystem tight for security/branding reasons. They’re also not a fan of reducing the number of devices that you need - which is the core of our mission. If people stopped going for the $2000 + $700 MacBook/iPhone combo and instead went for just the iPhone combined with a laptop shell for $150-300, then they’d lose a lot! We hope they’ll change their mind in the future but for now, we’re Android only :) If you’d like to back our campaign even as an iOS user, you could donate a Superbook for the Nelson Mandela #freedom2learn campaign. :) Last updated: Wed, Jul 27 2016 6:05 pm EDT

Does the Superbook work with Android Tablets as well?

Does it work with the Google Play Store and existing Android apps?

Does it also charge your smartphone simultaneously?

When in use, the Superbook will charge all newer smartphones using/supporting USB Type-C ports. However, not every micro-USB device will be able to charge their smartphone when in use–only higher-end devices from Samsung, HTC, and LG support this functionality as only these devices were manufactured with this capability. Last updated: Thu, Jul 21 2016 12:30 pm EDT

Does the Superbook require MHL?

Does the Superbook support Android N?

Yes! Note: currently, we do not support a small number of the latest Android N features. However, integration for these is planned in the upcoming releases–keep an eye out for an announcement from us! Last updated: Wed, Jul 27 2016 5:04 pm EDT

How does my smartphone send video to the Superbook?

The Superbook is based on Displaylink technlogy http://www.displaylink.com/downloads/android. We have been working closely together with Displaylink to bring the Superbook to the market. Last updated: Thu, Jul 21 2016 12:30 pm EDT

Does the Superbook support keyboards other than in English?

The Superbook model that we will be shipping out with the Kickstarter campaign will have the traditional English/QWERTY keyboard. The Android software/operating system does support different-language keyboards, and if users want, they can remap the keyboard to their own language. This way, the keyboard on the laptop shell will output in the language that they want. (The keyboard on the outer shell will still be the QWERTY keyboard, though.) EDIT: We hit our 150k stretch goal, so we’re shipping out international keyboard decals to everyone! At this point, we’re not sure which languages we’ll be sending out but there’ll be at least 5 Last updated: Wed, Jul 27 2016 5:04 pm EDT

How does it compare to the Chromebook (or another cheap laptop)?

The Chromebook is an independent laptop, unlike the Superbook, which is a smartphone accessory. Many of us have very powerful smartphones that contain processing power greater than that of most Chromebooks on the market today. When you choose the Superbook, you leverage the processing abilities of the smartphone, resulting in a far more powerful and superior experience. Additionally, the Superbook enables on-the-go productivity . Since everything already reside in your smartphone, by using your smartphone and superbook combo, you don’t have to worry about syncing information back and forth between devices. The final advantage that the Superbook gives its users is that the next time you upgrade your Smartphone, you are also upgrading the processing power of your Superbook - which isn’t true for the Chromebook. Last updated: Thu, Jul 21 2016 12:30 pm EDT

When are you shipping out?

Will you provide European backers with an EU charger?

We’ve only prepared US chargers right now, but we’ve already reached out to our manufacturing provider and are doing our best to work with them in providing European backers with the proper charger on ship day. Last updated: Thu, Jul 21 2016 12:43 pm EDT

If you reach your 1M stretch goal, how do I get / back the 1080p option upgrade?

Simply add $30 per Superbook to your pledge! After the campaign, you’ll also have the option to get the upgrade and indicate which Superbook (if you ordered more than one) you’d like to apply it to. Last updated: Wed, Jul 27 2016 10:30 am EDT

How much does the Superbook weigh?

With the regular battery, the Superbook weighs around 0.9kg. Since we met our 500k stretch goal, the upgraded battery will make it weigh a little more (but not significantly). Last updated: Wed, Jul 27 2016 5:04 pm EDT

What is the Superbook made of?

The Superbook is made of hard rigid plastic with a soft touch paint coating - it’s designed to be in line with most popular laptops! (What we’re saying is, don’t worry - it’s not flimsy at all.) Last updated: Wed, Jul 27 2016 5:40 pm EDT

How much will the Superbook retail for/when can I buy it in stores?

We’re not completely sure on the retail price of the Superbook just yet, but it’ll be between $130-150. As for retailing, we don’t plan on distributing until after every one of our Kickstarter backers receive their Superbook(s). At earliest it’ll be in March 2017. So back us now if you’d like to be among the first users! ;) Last updated: Wed, Jul 27 2016 5:40 pm EDT

Can you throw in some free oxygen into my reward?

Last Updated At: 08/29/16
Still Have Questions? Contact Us!
BackerKit FAQ

BackerKit is a service that crowdfunded project creators use to keep track of hundreds to tens of thousands of backers—from shipping details, pledge levels, preferences and quantities, whether they have paid or had their card declined, special notes, and everything in between!

The BackerKit software and support team is independent from the campaign’s project team—BackerKit does not handle the actual reward shipping. For more information about the preparation or delivery status of your rewards, please check the project's updates page.

How does BackerKit work?

After the campaign ends, the project creator will send you an email with a unique link to your survey. You can check out a walkthrough of the process here.

I never received my invitation. How do I complete the survey?

The most common reasons for not receiving a survey email is that you may be checking an email inbox different from the email address you used to sign up with Kickstarter, Indiegogo or Tilt Pro account, or it may be caught in your spam filter.

Confirm that the email address you are searching matches the email address tied to your Kickstarter, Indiegogo, or Tilt Pro account. If that doesn’t work, then try checking your spam, junk or promotions folders. You can also search for "backerkit” in your inbox.

To resend the survey to yourself, visit the project page and input the email address associated with your Kickstarter, Indiegogo or Tilt Pro account.

How do I update my shipping address?

When will my order be shipped, charged or locked?

That is handled directly by the project creator. BackerKit functions independently of the project itself, so we do not have control of their physical shipping timeline. If you want to check on the project’s status, we recommend reading over the project's updates page.

I completed the survey, but haven't received my rewards yet. When will they arrive?

As BackerKit does not actually handle any rewards or shipping, the best way to stay updated on the shipping timeline would be to check out the project's updates page.